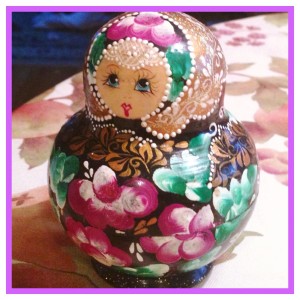 A matryoshka doll (Russian: матрёшка; IPA: [mɐˈtrʲɵʂkə] matrëška), also known as a Russian nesting doll, or Russian doll, refers to a set of wooden dolls of decreasing size placed one inside another. 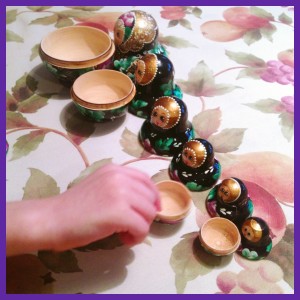 The first Russian nested doll set was made in 1890 by Vasily Zvyozdochkin from a design by Sergey Malyutin, who was a folk crafts painter at Abramtsevo. Traditionally the outer layer is a woman, dressed in a sarafan, a long and shapeless traditional Russian peasant jumper dress. The figures inside may be of either gender; the smallest, innermost doll is typically a baby turned from a single piece of wood. Much of the artistry is in the painting of each doll, which can be very elaborate. The dolls often follow a theme; the themes may vary, from fairy tale characters to Soviet leaders. The matryoshka dolls are often referred to as “babushka dolls”, “babushka” meaning “grandmother” or “elderly woman”. (Wikipedia) 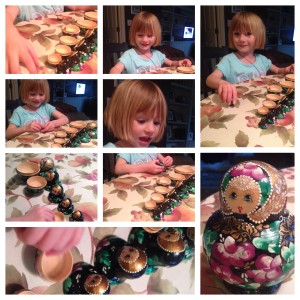 Here’s my little porchetta playing with the Russian Nesting Dolls that Uncle Tommy brought back from Ufa; Alexa’s birthplace. 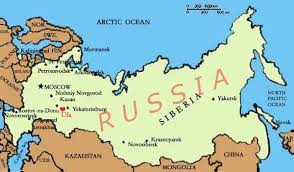